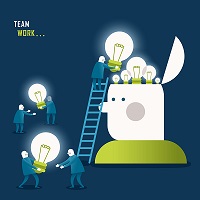 been stalled or delayed for one reason or another. Now that a new year is upon us, it’s a good time to kick-start your stalled projects. How? Here are four quick fixes to help you get started.

In a recent project, we were asked to completely redesign the front-end efforts in a 100-physician, multi-specialty group practice with three sites. As you can imagine, it required a large effort to ensure user acceptance, approval and endorsement. In fact, front-end user adoption was a firm mandate by the organization’s administrators since these employees were considered the ‘face’ of the organization. The redesign included the introduction of a brand new software application and a physical redesign of end-user’s work-stations. These changes resulted in the redesign of patient flow and employee work-flow processes. The project scope included doubling the registration staff and increasing the hours of operation to include weekends and evenings. But in order to achieve this redesign, we had to leverage the following four steps.

Effectively identifying your end-user experts is critical. The experience, job knowledge and understanding of patient and process flows of these experts is invaluable, therefore; their involvement is essential. These are the registration staff members that know how to collect the necessary information in the most expedient manner possible while making the patient in front of them feel as though they are the only ones in the office at that moment. Or, the scheduler that can quickly book multiple appointments across specialties for an out-of-state patient while ensuring the patient receives all pre-appointment information.

Perform an in depth assessment of the staff and of their current workflow processes to identify project champions. Observe staff as they perform their work and interact with patients, visitors or other staff. Incorporate interviews of the staff to identify their strengths and areas for improvement. Elicit feedback by asking staff which improvements they would make. Observe patient flow and staff interactions at each site.

The assessments and observations revealed that all staff knew their job tasks and duties very well and that job knowledge was equal among all staff. Those that demonstrated exceptional negotiation and customer service skills were selected as project champions, which are both crucial qualities in gaining trust, confidence and buy-in.

Include these project champions in project status and training meetings to promote ownership. Focus on getting them up to speed with the overall project as quickly as possible. Whether it is regular meetings, meeting minutes or on-line documentation, make pertinent information available to them. Establish regular update meetings for the project champions. Use these meetings to openly discuss issues, barriers and concerns. Close each meeting by identifying what is working well and what the next steps are, including due dates.

We found that holding front-end redesign project meetings twice per week was valuable. While the concerns and issues raised appeared to always be the same, talking about them openly made them seem less difficult to ultimately overcome, according to the project champions. They actively participated in identifying solutions which reinforced their ownership in the project.

Request that the project champions evaluate the training material. Recommend that they share and discuss the material with the end-users and provide feedback. Evaluate, revise and incorporate the ideas and suggestions when warranted. Discuss and address feedback not incorporated. This demonstrates project leadership support of the users. This also reinforces the project champion as an extension of the users.

Finalize the training material and make it available to all users prior to formal training sessions. This gives end-users the ability to review and prepare questions. Also, it may illustrate why feedback was or was not incorporated. Encourage the users to work with the project champions on any issues that they might have and encourage the project champions to follow-up with the users and resolve any issues or concerns.

Utilize the project champions in training demonstrations. This can be done initially in small groups and be very informal, then in larger groups in full simulations. These practice runs will not only identify potential issues, but provide users with the means to gain confidence. Administrators and other project leaders should participate in full simulation for the front-end redesign project. Patient wait times should be measured and identified as a potential issue during initial simulations. This will be attributed to the users’ learning curve and confirmed to be a non-issue after additional practice sessions. End users and project champions will be able to celebrate the tremendous success in final simulations.

Incorporate scenarios for role-play and solicit user input to ensure accuracy. This can easily be coordinated and authenticated by the project champions. This was an effective method in gaining user acceptance in the front-end redesign project. Because the users were nervous about making mistakes, taking too much time on the new system screens and worried that patients were going to become impatient, they quickly gained acceptance through role-play.

Finally, keep testing environments open to all users for as long as possible prior to the live date. This will afford users the ability to practice and stay current with any changes. Encourage this activity through continued status meetings held by the project champions.

Utilizing these four quick fixes will greatly enhance the understanding of affected users and facilitate acceptance throughout your organization, not to mention getting your projects back on track.